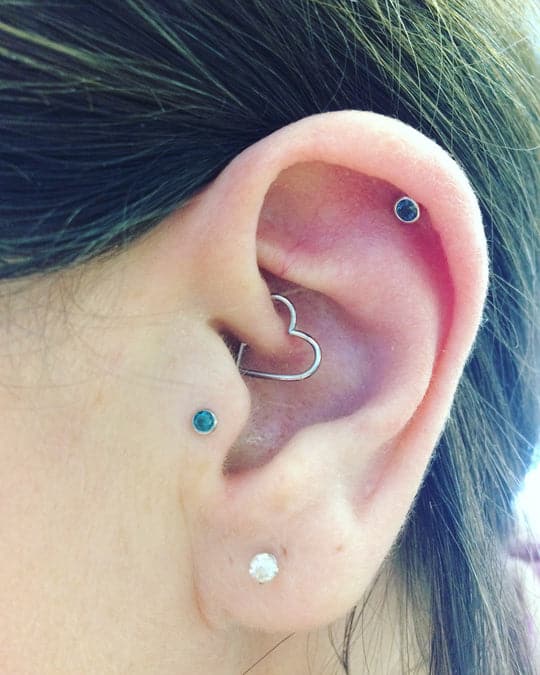 There are many claimed medical benefits resulting from a daith piercing. I will be taking a look at them all as I continue to write these entries but I will focus for now on my personal experiences. Obviously, I don’t suffer from every malady that daith piercing can reportedly help and I have made it quite clear that I have no time for pseudo science, but it is important to make a distinction between pseudo science and unknown science.  Quite why the daith piercing is so effective is still somewhat unknown, although there are people way more scientifically literate than me, who could possibly explain why such a simple procedure has such profound benefits.  In the meantime, I’ll deal with what I know from experience and I’ll eek in the science here and there where and when required over the forthcoming articles.  Also, as I don’t suffer from every malady that the daith piercing can help to alleviate or cure, I will refer to some equally scrutinous people for their experiences of daith piercings. Except this You must know how Vagal Tone impacts your health.

See the results of Nigel, 4 months after having his Daith Piercing.

For now, let’s get a bit mental!

Seconds after my piercing, I sensed the disappearance of two decades worth of neck tension that helped to shape my attractive round-shouldered look.  Years of neck tension vanished in an instant and has returned only fleetingly since. It returns when I get angry, stressed or impatient.  And that’s its job, to alert me that I am either in an unproductive situation or in some kind of danger! That was the first mental benefit I experienced as a result of the daith piecring –  an increased awareness of how I felt stress and how I subsequently stored it. The tension strikes, telling me I’m in a bad mood or in the presence of unpleasantness but instead of allowing it to get locked into my body, I now have the presence of mind to not store it!  Instead, I find myself acknowledging and looking at the situation and myself objectively, causing the tension to fade away as quickly as it came, instead of contorting me permanently.

Another mental effect is that I am, at least subjectively taller and possibly actually taller!  Although it seems that I have only benefitted from only one physical effect of  the many claimed after a daith piercing, it is apparent that there are a bunch of subtle knock-on benefits including my perceived extra height. Owing to the restored freedom of movement in my neck, I am holding my posture better.  Just as the neck tension is now fleeting, so my tendency to “hunch,” is also fleeting. I walk more upright. It remains to be seen whether or not my new habits will improve my posture further but it is most definitely improved enough that I feel, and possibly am, taller or back to the height I should be.  I therefore now conduct myself with more confidence and with more confidence comes more self-respect – .another mind benefit.

Another most unexpected anomaly is that I am increasingly more inclined to want to eat real food!  It’s not a health drive,  I just desire real food of late. I’ll still have some chocolate or sugar in my tea, but I generally just want real food. I crave healthy stuff most of the time.  I am also enjoying a flow-state presence, and “sharpness,” of mind, which, in turn, means better decision making and I like myself more.   And because I like myself more, I not only want to eat mainly real food, but I’m also interested in wearing good clothes and being nice to myself, a couple of things I have shunned in recent years.

So although I do not suffer from migraine more than once every couple of years, I sure as Hell, because it is Hell, do suffer from anxiety and depression.

anxiety  –  a feeling of worry, nervousness, or unease about something with an uncertain outcome.

I have for the past twenty years suffered from a deep anxiety disorder.  It took the form of a rather debilitating and profound hypochondria, all twisted up with depression. I have taken every drug and tried every strategy to escape this mental Hell.  Nothing has worked in 20 years – NOTHING! There was plenty of opportunity for me to feel better because of some psychosomatic or placebo effect for any amount of time but I have never felt distanced from my own demons for more than a day. Placebos do not stand the test of time when it comes to anxiety and depression. Anyone who has depression or anxiety knows that the depression monster won’t be fooled for long, it will shake off any attempt to subdue or be rid of it.  I have been, however, in an upbeat state for weeks now – like a Ninja ballerina! I am not completely free, but the ratio has switched!  Hypochondria and depression made the backdrop of my life and I would occasionally have a nice half a day.  Now, I enjoy a sense of optimum well-being with only the odd hour of darkness, but my renewed presence of mind is the majority shareholder in my brain and things are as they should be – mostly always sunny with the occasional cloud. And it’s a cloud I can reduce to near nothingness and deal with. Head Weather is definitely much better these days.

Here’s my favourite bit though: With the lifting of the emotional fog, there is a lifting of the intellectual fog. I am functioning better in terms of brainpower. My ability to express myself in speech has improved and I am enjoying more mental agility and recall. Subjective perhaps, but it feels real and I feel well, and have done for weeks now, which is a first!

Even if I were deluded about the benefits of my daith piercing, then the very least I take away from this is an ongoing sense of well-being in a mind normally given to despair,, self sabotage and feelings of doom. That’s gotta be worth the punt!

Experiences and stories of daith piercings may vary, from the life-affirming to the absurd. I will tell you, however, I have yet to meet a person for whom there is no benefit, not a single one.  I’m not saying it will make you Eddie Morra in the movie,’Limitless,’ but for the first time in decades, I feel up for anything, optimised mentally and buzzing physically. I heartily recommend you give this a shot.

This Way For The Science