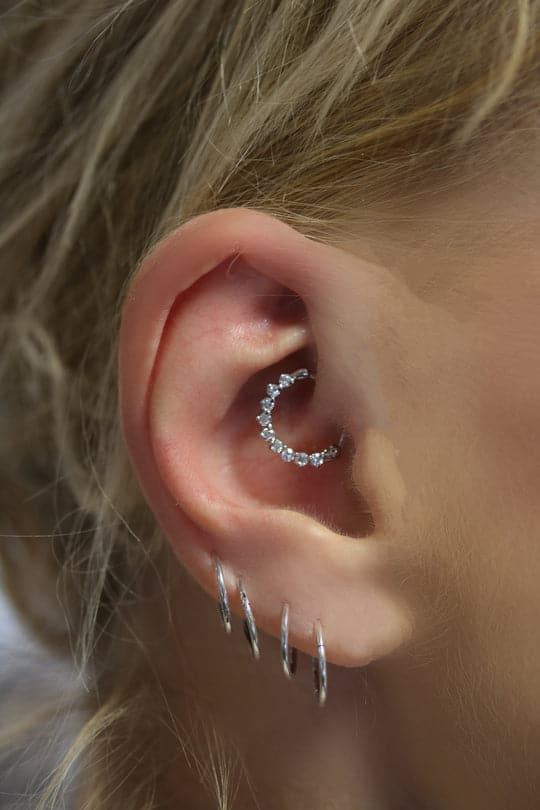 And it’s an inexpensive one-shot deal! Magic bullets are rare but every so often a magic bullet solution does come along, and there is no shortage of people who will attest to the effectiveness of this treatment!   The treatment takes only seconds – as much time as any piercing, yet it has an instant and profound ongoing effect!

“A migraine is a headache disorder lasting anything from a couple of hours to a couple of days. The headaches occupy one half of the head, normally, and are often accompanied by feelings of nausea and a pulsing  throbbing dizziness as well as an extreme sensitivity to light, sound and even smell. The sufferer cannot move without causing the symptoms to worsen or “swamp!”  Sufferers may also experience weird visual disturbances. For me, as a 10 year old boy, it was a kind of kaleidoscope of shimmering geometric shapes, quite beautiful in their own right, but unfortunately they tended to be the first symptoms of a migraine and therefore the harbinger of ugly inescapable suffering.  After the initial “fairy lights,” I knew I was in for a bad time and there was nothing I could do to escape what was to come. Sometimes it was a fly-by or a shot across the bow and after only 90 minutes it began its fade away, having only held me down for a short while but sometimes it lasted a whole day. I would rather have gone to school.

The doctor told me to lay off chocolate, cheese and coffee.  I was 10 years old, but being a child of the seventies, coffee was indeed part of my daily life.  And indeed, the drug of choice for my migraines was codeine, courtesy of the “bad old days.”  Over the following years my migraines faded to near obscurity and as I said, I only get them once every couple of years.  For most migraine sufferers, however, the frequency and amplitude is far greater.

Listening to the conversations between  Richard Soper and migraine sufferers in the consultations, it became apparent that a Daith Piercing for Migraine is for the majority of Migraine sufferers, the last resort.   And it was the last resort after many sensible attempts to remedy as well as some exposure to  quackery.  Six months ago, I would have dismissed Daith Piercings as the latter.

It nonetheless remains, however, the last resort for those who have tried everything – all that the pharmacies and the oh so expensive Dolphin Channellers have to offer, yet they still suffer. To date, there is no “cure.”  There is, however, a humble piercing that seemingly stimulates the flow of the Mighty Vagus Nerve System and it is having a massive effect on a great number of people.  It does so in a way that I don’t fully understand, although I do keep reading and rereading  the speculated  science that underpins it.  Critics say they that anecdotal evidence is no proof, and I AGREE!  Anecdotal evidence is next to useless in all arenas, but I make a distinction between anecdotal and experiential. And I, like all the people in the reaction videos, have experienced a difference. We  know that Daith Piercings for Migraines work! For me it was not so much migraine but some related issues. If you read my other blogs on the subject, you’ll get a list of the effects that I have enjoyed. And it’s not a ludicrous list, it didn’t cure me of baldness.or my allergy to Elvis Presley. It made historic neck tension vanish and I’m kind of Zingy; physically and mentally, like a Ninja ballerina!  The effect in most cases,  is instant and ongoing.  We have even had people in mid-migraine come in for a treatment and they have had an instant response – the migraine fades with the Daith Piercing.

Check out the reaction videos.

So my point is this:  There are many degrees of Migraine and many strategies for dealing with Migraine, some involve  the long-term use of drugs and some involve expensive alternative medicine from people who are convinced that they are the reincarnation of Queen Nefertiti  and make you pay handsomely for the privilege. Most things don’t work!  People end up having a Daith Piercing for Migraine not because it is the last resort,  because it’s not actually part of public consciousness yet, so they more stumble upon this weird little treatment purely by accident.  For a great many, the Daith piercing turns out to be their last  hope but also the one that actually works.  So maybe it would be prudent to make a Daith Piercing For Migraine the first thing you try!  You may be eliminating the hassle of  a whole load of drugs or even expensive bogus therapies from TQ 9ers.

Try a Daith Piercing first – not last!  Or do it now, if you are already on that big journey of trying to find a treatment that really has an effect.  And it may be that a Daith Piercing doesn’t work for you.  It is, after all, only a simple cosmetic piercing procedure that it has been discovered has had a positive effect on some people – including me! That was when it was random, now there is a whole combinatorial strategy for Optimum Vagus Flow.  Statistically,  you stand  more than a good chance of being someone for whom it really is effective.  You might not, of course.  But make it one of the first, if not the first thing that you try. It makes sense that to do something that doesn’t impact negatively on your body chemistry or finances and yet may prove to to be the solution to your problems. This would seem the best way to go with the least risk and the most potential for success. The very least you take away is a pretty piercing from the people who have defined the technology and the industry. Keep reading to learn how daith piercing works.

DAITH PIERCINGS FOR MIGRAINES IN BURGESS HILL – A NEAR MIRACULOUS SOLUTION FOR SUFFERERS!